China’s claims to Indian territories beyond the usual Chinese claim line are not unexpected but are indeed bewildering. They are not unexpected because that is what Communist China has been doing since her establishment, or emancipation as she prefers to call it, in 1949.

Emancipation from who, one may ask? From the so-called tyrannical forces of democracy proponent Chiang Kai-shek and his handful supporters making up the Chinese Nationalist Party, who later fled to the island of Formosa, now called Taiwan.

China is the only country in the world to have expanded its territories in the 20th century. China is slowly but steadily trying land-grabs in Indian areas including those where no difference in perception exists.

No basis of recent claims by China

Recent claims of Chinese foreign ministry spokesperson Zhao Lijian — who used the Twitter handle Muhammad Lijian Zhao till 2017 when he was posted in Pakistan — to the Galwan estuary are astonishingly foolish.

There is no basis to China’s claims on Aksai Chin. The Chinese forcefully came into this part of India when they occupied Tibet in the 1950s. The PLA occupied Aksai Chin partly and constructed a road connecting Tibet with occupied East Turkestan, now called Xinjiang province.

Later in 1962 when India was vulnerable, Communist Party of China (CCP) expanded their occupation up to what today is the Chinese claim line (CCL).

India’s claim line is the Johnson Line, the traditional boundary of erstwhile State of Jammu and Kashmir. The Ardagh Johnson Line which extends to certain parts of Xinjiang has a valid historical basis, thus underlining India’s claim.

Payment of taxes in areas around Kailash Mansarovar

The barren yet vast areas of eastern Ladakh have been neglected by India after Independence due to the chaos and strife that ensued after Partition.

The land and financial records of Government of India, however, clearly show that taxes were paid by villages around the Holy Parikrama of Kailash Mansarovar, including Taklakot.

After China occupied these territories in the 1950s and later in 1960s, the practice was curbed and stopped.

New maps of China were published in January 2015. They contain areas claimed by China, including in the South China Sea where it was indicated by nine-dash lines.

The Chinese boundary was indicated by three thick lines in this map covering an almost 150-200km wide area. The blue line seems to be more close to the actual boundary is roughly 10-40km wide. These maps were neither accepted by any of China’s neighbours nor by the rest of the world.

The recent Galwan Estuary claims although purposely brazen, are very serious in nature.

The claim to areas up to the Galwan mouth indicate China’s intentions to stop progress on the strategically important Darbuk – Shyok – Daulat Beg Oldie (DSDBO) road being constructed by the Border Roads Organisation (BRO) of India. 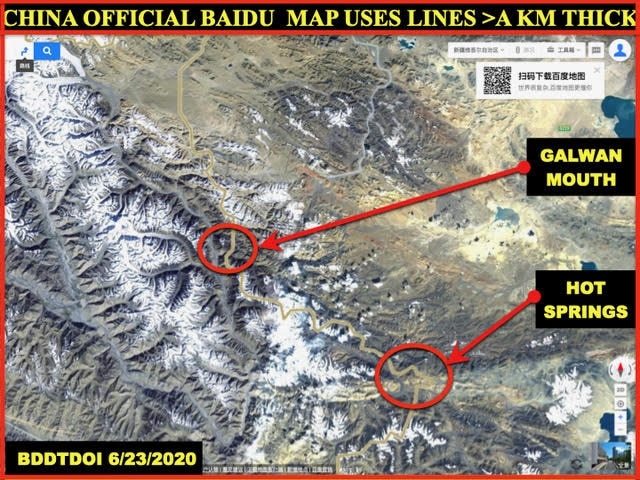 The Baidu Ditu (Baidu Maps), a Google Earth equivalent of China, gives out the official version of their claim line with India. Even that clearly indicates that the present Line of Actual Control (LAC) is more than 5km east of the Galwan estuary. 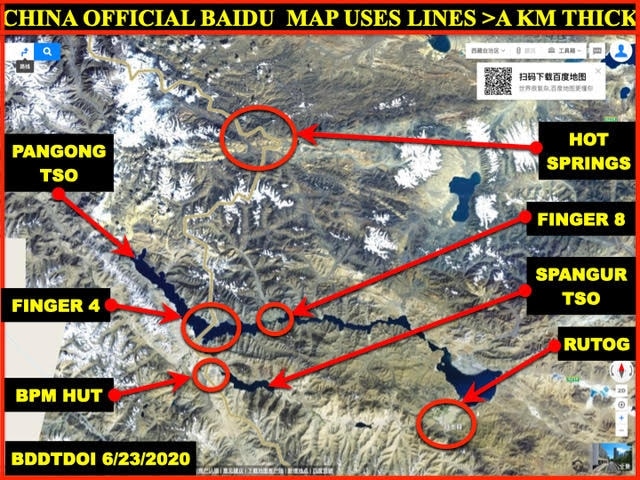 The Chinese claim to the Galwan was busted on India Today.

(Col (Retd) Vinayak Bhat is a consultant for India Today. A satellite imagery analyst, he served in the Indian Army for over 33 years.)